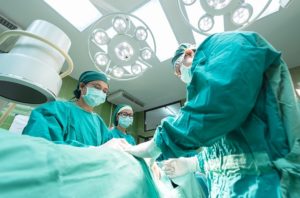 A person, we’ll call him Joe, asked if he could bring a lawsuit against a Chicago bar and bouncer as a result of being injured by a bouncer employed by the bar. The easy answer is that one can always bring a lawsuit. The more difficult question to answer is whether or not the lawsuit will be successful and will Joe recover compensation for his injuries.
Joe was asked to leave a bar when his friend became involved in a heated argument with another patron. Joe was at the bar with a group of friends and did not think it was fair that he should have to leave due to his friend’s conduct. The bouncer told him to leave and when he stayed to argue, the bouncer took hold of him and forcibly took him out of the bar. On the way out Joe says that the bouncer punched him, causing him to fall, injuring his knee.
The general rule is that a physical attack of this sort is criminal in nature and would be outside an employee’s job duties. While a claim could always be brought against the attacker, this type of person rarely has funds sufficient to pay for the damages and is judgment-proof. If there is insurance in such a situation, it will generally not cover this type of behavior as it is outside the scope of employment and the insurance contract. At Nilson, Stookal, Gleason & Caputo, we pride ourselves in being able to find a source to pay the damages suffered by our injured clients.
The exception to the general rule applies to those persons whose work requires them to make physical contact with others. This would include security personnel, auto re-possessors and bouncers. If it can be shown that this bouncer was doing his job, the fact that he used inappropriate force against Joe may still allow insurance coverage. The claim would be brought against the bouncer and his employer, the owner of the bar. The insurance would cover both. It would be argued that the bar is legally responsible for the bouncer’s actions because it was within the scope of his employment as a bouncer.
This is also a case that can be brought against both the bouncer and bar owner in Cook County Circuit Court, which increases the value of any potential jury verdict and, therefore, increases the settlement value of the case. The potential value is much higher than it would be if the case would have to be brought in DuPage County.