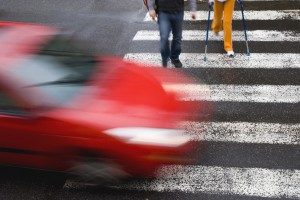 The most common cause of death for children under the age of 15 is car crashes, and over one-fifth were on foot rather than in a vehicle, according to the National Highway Traffic Safety Administration’s Traffic Safety Facts for 2012. Another 11,000 child pedestrians were injured that year, and more than 1,600 of those were in Illinois.

Risks for children on or near roadways and in parking lots are much greater because their small size makes it difficult for drivers to see them in time to stop. They are also less likely to follow pedestrian traffic rules and are often unable to accurately judge distances and speeds of oncoming vehicles.

Distracted driving and speeding increase danger to children in crosswalks

In order to highlight the risks of children and car accidents, Safe Kids Worldwide’s Department of Evaluation and Research conducted a national study in the United States during the 2008-2009 school year. The results revealed that one in six drivers in school zones were distracted. A distraction is anything that takes the driver’s eyes, hands or attention away from the road. Fifty-five percent of the distracted drivers passed through during after-school hours as children were leaving. An inattentive driver going 30 miles per hour typically takes 100 feet or more to come to a complete stop, which is not enough time to react when a child enters a crosswalk.

While an attentive driver needs approximately 45 feet to come to a stop, a driver in the same situation who is going five miles per hour over the posted speed limit will hit the child at about 18 miles per hour. This amount of force has the potential to cause major injuries, and even death, and the danger of injury or fatality corresponds with the increased speed of the vehicle. The most common types of pedestrian injuries are broken bones in the legs, lacerations and head trauma. Of these, traumatic brain injury is often the most devastating because of the physical, mental and emotional damage that are a common result.

Drivers can reduce the likelihood of a injuring or killing a child by observing posted speed limits, maintaining constant focus on the task of driving, and exhibiting extra care in school zones and intersections. Parents can reduce the danger for their children by teaching them pedestrian safety. This includes walking on sidewalks or against traffic on the shoulder, crossing at designated crosswalks or intersections, and wearing light colored clothing and carrying a flashlight after dark.

When children are victims of pedestrian accidents, family members often benefit from the advice of a personal injury attorney who is familiar with the Illinois legal system and can obtain full compensation to cover medical bills, pain and suffering.